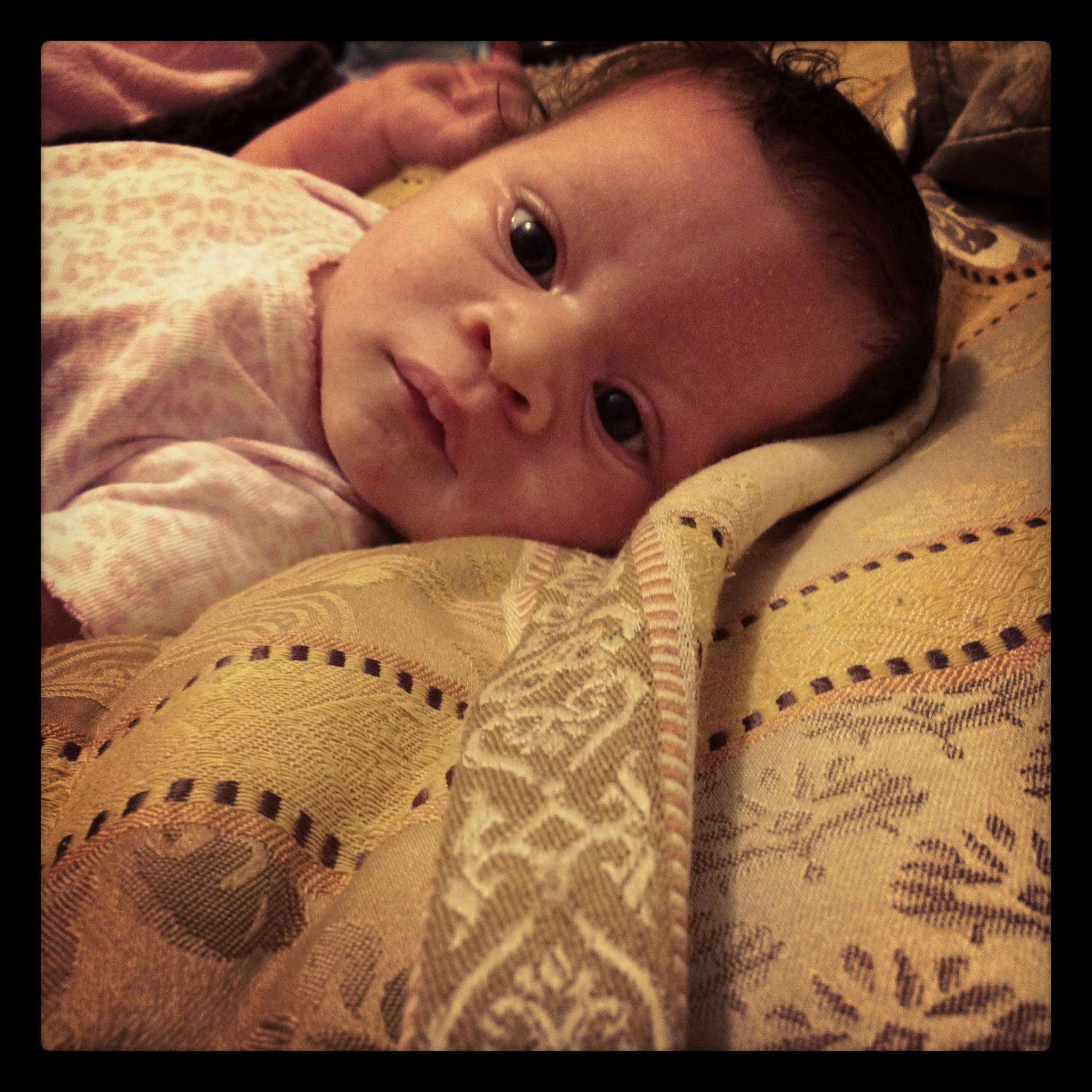 By Ife Togun, excerpted from his blog The Skye Chronicles.

Skye turned one month old on Saturday, which means a number of things should have happened by now including but not limited to:

Skye mastered all of these and moved on to some of the behaviors reserved for two month olds, such as tracking moving objects, smiling, and making noises other than crying.

I know, I know, I’m likely making the proud father mistake of taking meaningless gestures as signs of advanced baby genius.  But it’s hard not to.  At least not until such a time around the age of sixteen when she goes on a nationally televised high school quiz show in Washington, D.C., and proceeds to embarrass me by proclaiming “Texas” as the capital of the United States.

Only then…perhaps.  Until then, super baby genius.  I’ve already started reading her “A Brief History of Time,” and she seems to like it.  She stares at my mouth with rapt attention as Stephen Hawking’s words flow from it.  Of course, it may just be the cadence of my voice.  But again, until that fateful day in D.C., I’m sticking with the super baby genius angle.

Now that Skye’s a month old, it’s time to return to the doctor’s office at Kidcare Pediatrics.  We’ve been back once before, at 2-weeks, for a routine check up.  This time is different though.  This time Skye has to get another immunization shot.  All the shots and tests are not fun.  The last time Skye got stuck with a needle, it was for the battery of tests required by either the state or the federal government to ensure she doesn’t have any odd illnesses that need to be immediately addressed.

I literally had to hold her down as a buxom, jovial, black nurse named Angie, squeezed her heel with the strength of a thousand pound press, and stuck a needle into it to draw blood.  Imagine holding something so fragile in your arms, telling her it’ll be okay.  She trusts you.  She’s calm.  And then, contrary to your word, it is not okay.  A needle enters her tiny heel and she starts to cry.

Once she is able, through her moist, red eyes she levels you with a gaze of anger and loathing you would not have thought possible of an infant.  It reminded me of growing up as a kid in Nigeria, watching my father and his friends slaughtering chickens in the backyard.  Sometimes, after losing their heads, the chickens’ bodies would kick into survival mode and they’d take off in a headless, manic run.

But did they head for the men who lopped off their heads?  Of course not.  They came for me, the skinny, well away from the carnage 7-year-old boy, as if to say, “I knew they were mean, but you, I trusted you!  You fed me corn!”  I’d run across the yard, screaming for my mother, as the headless, flapping, soon to be dinner chicken gave chase in a surreal reenactment of “The Legend of Sleepy Hollow.” I no longer eat meat.  Haven’t in years.  These “chases” likely played a part.

At the doctor’s office, a nurse named Debbie directs us to the “2nd to the last door on the left” at the end of a long corridor.  The room looks exactly like all the other ones we’ve been in at KidCare, from the location of the examination table down to the placement of the big tub of generic Purell on the table.  It’s comforting.  Like finding a Burger King on a trip to rural China after eating chicken beaks for a week.