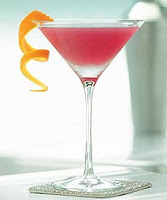 By Chris, from her blog A Hairdresser's Diaries.

Marilyn, a very good friend, was having a bridal shower for her daughter Lynne. The decision for not having strippers at either the shower or the stag was agreed upon by all. She was not sure how to make the shower fun without the silly games and party favors. So she decided to have the shower at a hotel and local bar so no one would have to drive home inebriated.

I have never been a drinker.  I did, however, like one drink that my sister learned to make in Bartending School. The love of cherries was my downfall. The drink was called, ‘A Cherry Hooker:’ cherry brandy and orange juice with 3 cherries impaled on a plastic skewer. I always requested a whole lot more orange juice and a lot less brandy.

It was quite the joke about my heavy drinking. My kids teased me saying, “If you even open a beer bottle in the same room as Mom, she gets drunk.” I was a cheap date to say the least. I was looking forward to the night out and figured I would nurse one drink. Therefore, anyone I didn’t know would not ask questions. I did not advertise my drinking habits as sometimes I found I was defending myself. I was also not familiar with the new-fangled drinks that were circulating the bars.

I will not say I am a prude, but I am a bit naive. When I arrived at the hotel, everyone else was already seated at a table. I knew most of the girls, but there were a couple new faces. We had our introductions. Marilyn then asked, “Who wants a drink?”

The hands were flying in the air and an array of drink names shouted out. Marilyn waved her arms and said, “I think the late-comer should place the order.” Everyone thought that was a great idea. I of course was the late-comer.

“Okay,” I said, “What is everyone drinking?” Marilyn looked at me and smiled, “You’ll have to memorize the drink names; they’re not what you are used to.”

“Not a problem. I will write them down.” Then I asked, “Why don’t we just give the order to the waitress?”

Lynne piped up and said, “If you give them to the bartender first, the waitress can just keep filing our orders for the rest of the night.”

I shrugged, “Okay no problem.” I started to write,” So what’s the order?” I was surprised at the list, but I was assured I had it written down properly. Off to the bartender I went. Now I was sitting on the high stool looking straight into the face of this very handsome, young man. Behind me, I could hear giggles, but didn’t pay too much attention. I needed to concentrate on the drink list. Oh boy, where was I to start? Okay I would start with the simple ones first.

Leslie wanted a Screwdriver. With that, the bartender nodded. Carol wanted a Planters Punch, again a nod. Betty wanted a Slow Screw? Yep, that one was okay but with that one, he smiled. Lynne, ordered a Slow Screw with a twist? Whew, this was getting a little embarrassing. The bartender didn’t even miss a beat. Now for Cathy’s she wants an Orgasm. By now I was getting a bit flustered and had my face lowered and my hand shielding my eyes. Now flabbermouth blurted out, “Do you know how to make a Happy Hooker?”

“No, my dear but I do know how to make a hooker happy.” With that, everyone at the table burst out laughing. These wonderful ladies had set me up. The bartender was in on the whole deal. The drinks were indeed real drinks, but the girls at the table were not having any of them. The most exotic drink served that night was my Cherry Hooker. Now who, other than your friends, would love you so much and feel comfortable enough to embarrass you in front of a cute bartender and still know you loved them.


Read more of Chris's Flabbermouth stories at A Hairdresser's Diaries.

Do you have a funny drink story? Share it here at My Embellished Life so others can enjoy it.