When I was a nun 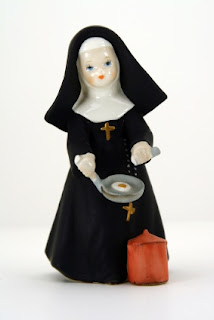 When I was a kid I had a few different career aspirations. I remember two of them quite clearly:

As a teenager I had it in my head that I would become an RCMP officer. I loved the idea of upholding the law and riding horses and having a gun. I didn’t get far down that path, however. I did learn to shoot a rifle, but an astute career counselor and a battery of personality tests directed me away from any career that would require me to follow rules. Apparently, I believe in following the law, but boy do I despise rules!

The other career I recall wanting to follow was when I was much younger. Some age in elementary school. I wanted to be a nun. It didn’t worry me that I wasn’t being raised Catholic. Nor did it worry my grandmother, Nonny.

Nonny came from a long line of Anglican ministers - starting back in 1845. Her brother was an Arch-Deacon and a good friend of the Reverend Billy Graham (the only TV evangelist she watched). My dad’s generation was the first in over 100 years that failed to provide the family with their Reverend... so I guess she thought that making up for that lapse with a wee little nun wouldn’t be a bad thing.

I’d forgotten all about that goal... And about the time I came home from Bible Camp and tried to secretly convert my 3-year-old brother to a born-again Christian life. (Oddly, my parents didn't send me back to that camp the following summer...).

But two weeks ago these old lives of mine came flooding back (I'm sure if I thought hard I could come up with a clever Biblical pun, but those really are old lives). What happened two weeks ago? I had a past life reading and guess what? Several hundred years, but only two lives ago, I was … a nun!

It’s true. I lived in Rome. I was very devout and I never sinned. But – and this is the information that has me convinced that the reading is accurate – I was a nun who challenged certain rules of my Church.

Apparently, I could not reconcile the fact that, as a woman of God, I could only show my devotion with my spirit. I wanted to use my body as well. I was one of those progressive nuns who believed that we should be able to serve God and be allowed to experience not just spiritual but bodily ecstasy as well.

It may have been several hundred years and two lifetimes ago, but I still hold that same belief… why have the ability to feel spiritual, emotional and physical pleasure (and pain, of course) and not explore all of these as fully as we can?

I think I’ll get a piercing or a tattoo tomorrow…

Have you ever had a past life reading? Or do you just have an innate sense of who you were in a past life? If so, share your story here at My Embellished Life. Guidelines - which I guess I'd have to excuse you for breaking - are here.

And if you enjoyed this post, please read some of the other wonderful writers who have contributed to this community blog. And leave a comment or a Google + on one you particularly enjoy. We all love a virtual high-five.
Posted by Donna at 10:00 AM