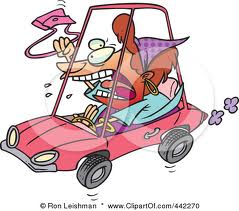 By Peggy Strack, from her blog Kick Back Moments

I have a 30-mile commute to work on a congested highway. The distance isn't the biggest problem, nor is the traffic. It's the other drivers that are maddening. If I leave home by 6:45, it's okay, but by 7:00 the trouble starts. It's as if cruising dolphins suddenly turn into vicious sharks prepared to attack anyone who gets in their way.

On Thursday of this week I was running late. I left my house at 7:10. The first twenty miles were uneventful. The sun was hovering on the horizon and excellent tunes were popping up on my I-Pod. Then it happened.  I veered into the left lane to make room for the hordes of vehicles that merge onto to the highway at Exit 8. As Coldplay entertained me with Viva la Vida, I peeked into my rear view mirror and saw her--a road shark. Lead Foot Lucy was charging toward me and within seconds was right on my tail. Maybe you've seen her before--bulging eyes, one hand flailing, the other hand gripping the steering wheel like it's the safety bar on a roller coaster. She looks a little like this:

I looked to my right. No room to switch to the middle lane. Lead Foot Lucy was going to devour me. Several yards separated me from the car ahead and I thought about accelerating, but decided not to. I like being a dolphin and didn't want to catch the shark virus. I refused to be intimidated into causing an accident or getting a speeding ticket. Lead Foot Lucy didn't like my decision and inched closer. Why was she in such a rush anyway? Was she on her way to save the global economy? And if she was, maybe she should have left home earlier. She was really starting to annoy me so I took a kick back moment. Relax and enjoy the show. I cruised along a touch above the speed limit. After all, I was in the passing lane. (Sidebar question: Does the speed limit increase to whatever you want it to be in the passing lane, or is the speed limit the speed limit?)

I looked in the rear view mirror again. Lead Foot Lucy's chin was almost touching the steering wheel and her teeth were clenched. I chuckled, but it really wasn't funny. She could have easily caused a multi-car pile-up and I'd be the first victim. Just then free space opened up in the middle lane. Within two notes of the song playing on my I-Pod, Lucy sped past, then darted in front of me.

The highway ended and I sat in my car waiting at a traffic light right behind Lead Foot Lucy. We ended up in the exact same spot at the exact same time. If I had succumbed to her pressure to speed up, we might have gotten through that traffic light a little sooner, maybe by three minutes, at the most. Is three minutes worth a blood pressure spike, heartbeat acceleration and an overall crazed feeling? When the green arrow appeared, Lead Foot Lucy zipped around the corner. I smiled and waved, but she didn't even notice.

So how do you drive when you're in a rush to get somewhere. Are you a cruising dolphin or a vicious shark?

READ MORE of Peggy's Kick Back Moments. Peggy says her blog is "a place where the art of relaxing, laughing and slowing down are explored." Each week she posts one original story, a song and a book recommendation. It's a fun blog with lots of great for kicking back photos.

Want to drive along with a real road shark?

As I was getting this post ready, the news was on. I only half-listen but the sound of a speeding car caught my attention. It was a story of a Japanese doctor who put a camera in his Ferrari, filmed himself driving at 140 km/hour (on the highway and in residential areas) and then... posted his video to YouTube. Guess what? He's been charged with dangerous driving.

And now it's your turn to share a story. Cruising dolphins and vicious sharks are welcome to contribute to My Embellished Life. Find out how here.
Posted by Donna at 4:00 PM